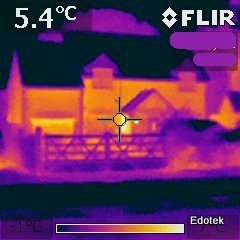 A Thermal Image investiation of your home or building could quickly reveal;

When you have received our report (usually within 4-5 days of the survey), you can use the results to make improvements yourself or engage a contractor to do the work. Once identified, many faults can often be rectified quite easily, achieving good energy savings and reducing fuel costs. Autumn and winter are the only times of the year when thermal image surveys can be done effectively, so that there is a significant difference in temperature between inside and out.

Edotek is not part of franchise operation and we can only offer to cover property in Oxfordshire and surrounding areas. All of the Edotek personnel who perform these surveys are science or engineering graduates